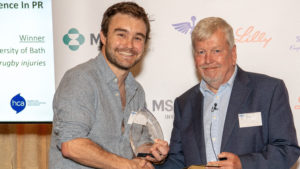 Universities are real treasure troves when it comes to developing and pitching stories for media. In terms of the research that’s carried out, there’s a constant stream of studies covering myriad topics offering breakthroughs, challenging wisdoms or shining a light on previously unreported issues. These are all enhanced by a bank of experts who know their subject inside out, able to speak passionately about it and why it matters.

That’s not to say the role of a press officer at a University is always a walk in the park. Translating weighty texts into something digestible that makes sense and appeals to media, simplifying years of dedicated work, and thousands of words into a neat side of A4 to encapsulate the nub of a story without dumbing down, takes both time and effort. ‘What does that really mean? Why would anyone else be interested? What needs to happen now?’ are all questions which regularly leave me scratching my head for answers.

Sometimes, though, golden stories come across your desk; the kind of research that you know with the right treatment, and a dose of good luck, deserves its place in the spotlight. So it was the case in 2017 when rugby science expert at the University of Bath, Professor Keith Stokes, emailed me with an embargoed copy of an imminent paper under the subject line ‘Benchmark study: injury reductions in youth rugby’.

Keith’s study, to be published in the British Journal of Sports Medicine, drew on findings from the School Injury Prevention Study that had been conducted between the University and the Rugby Football Union between 2013-16. It demonstrated massive effects of a newly devised 20-minute warm-up programme, known as ‘Activate’, on reducing injuries for young rugby players.

These results were dramatic: when youth players performed ‘Activate’  – which focuses on balance and pre-activation exercises – before matches and during training, overall injuries fell by 72%, concussions by 59%. Off the back of these findings, England Rugby were to roll out ‘Activate’ across the UK. It built on previous, significant rugby research from the same team who four years previously had helped to develop ‘crouch, bind, set’ to reduce injuries for the scrum – something which has since been rolled out around the world at all levels. All combined, it told a compelling story about how our research was making rugby safer, and it countered challenges which arise periodically in the media about the sport being too dangerous, in particular for children and young people.

Working with Keith and the RFU I developed the story and created a short explainer video to describe in pictures what ‘Activate’ was. We liaised with the academic journal to time the study’s publication for a day when the research team could be available, and planned to coincide this just after an event that would bring everyone involved to Bath, including some of the school children involved in the study. This enabled me to offer exclusive advance filming / recording opportunities to various broadcasters, to arrange new pictures for print and online and also provided a chance to get all the right people together to field media requests in advance of the embargo lifting.

Getting these findings into the BBC system, and in particular onto BBC Breakfast, had always been the target. These things always chop and change though and it wasn’t until the very last minute, the night before, that a live broadcast was confirmed for the day of publication. At the eleventh hour (literally) I liaised with a local school to arrange access for filming and kept my fingers crossed that their youth team would be out of bed and ready to practise drills into front of a national audience of 7 million on TV the next day!

I needn’t have worried. The school was incredible as were their young players and the Breakfast broadcast was set against the backdrop of a stunning, sunny, South West May morning. In between live segments for Breakfast, Keith took interviews from World Service, Radio 4 and 5Live, through to Radio 1 and BBC Asian Network. Sky News, ITV, Talk Sport, The Times, The Guardian, Telegraph, the Daily Mail all followed, as did extensive sports, regional and then international coverage. In total, over 242 individual items of news coverage in one day, an estimated international audience of 30 million and much more in the time since.

When I heard about the MJA PR Excellence Award a few months later, I thought it was worth a punt putting forward an application. I’m really glad I did. All too often we move straight onto the next job without reflecting on things that have gone well. We were up against really stiff competition from some of the big agencies in London and turning up at the Award ceremony I had no expectation of winning, but was absolutely delighted to do so. This was a fantastic story to work on, built on particularly newsworthy research, supported by an academic who instinctively understands media, and was an example of a real team effort involving many people.

As for ‘Activate’ 18 months on, I understand Keith still gets regular enquiries about the programme as a result of coverage highlighting the real value of publicity beyond airtime or column inches. The work was also celebrated last year by Universities UK as part of its #MadeAtUni campaign, and just last month, ahead of the Rugby World Cup taking place in Japan, World Rugby announced it would be rolled out around the world. All told, quite some impact!

If you’re working in comms in HE and have a similar story to tell that you’re proud of, I’d encourage you to put forward your story for next year’s awards.