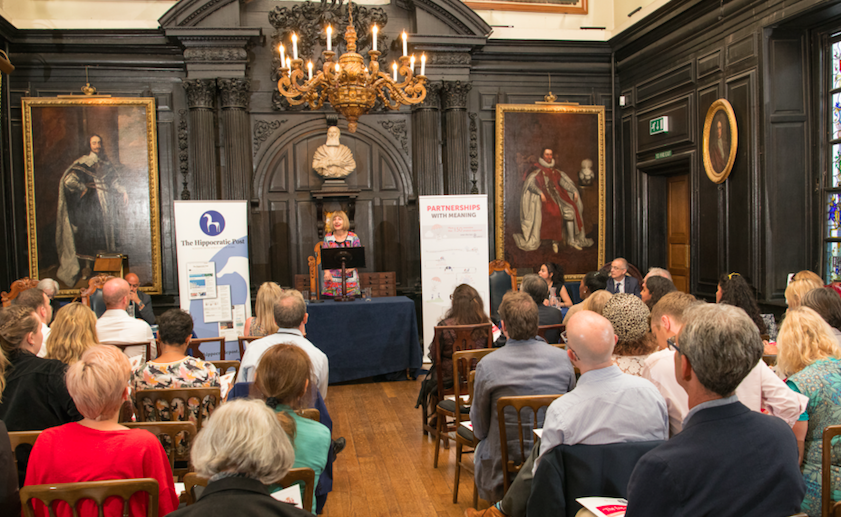 The end of HIV?

Everyone who was there, and many people who followed the Hippocratic Post 2018 debate, The end of HIV?, on Twitter and social media, agreed that last week’s event was a powerful and compelling discussion about one of the most important health issues of our time. Over 70 invited guests gathered in the historic Apothecaries Hall in Black Friars to listen to our four prestigious speakers, Professor Jane Anderson from the Worshipful Society of Apothecaries, Dr Huda Taha from the Royal Society of Medicine, Dr Michael Brady from the Terrence Higgins Trust and Dr Yusef Azad from the National AIDS Trust. All made heart-felt cases for why there was reason to be optimistic about the end of HIV, and why optimism may be misplaced. The audience were invited to vote at the beginning and at the end of the debate, following a lively Q&A session.
Chair Carole Stone CBE opened the debate by qualifying our debate title, The end of HIV? Instead, speakers had been asked to present their arguments for an against the principle, Will HIV be irrelevant by 2050? She asked for a show of hands and a small majority of people believed that HIV would still be relevant by 2050.
Professor Jane Anderson CBE, proposed that there were indeed reasons to believe that HIV could be irrelevant in thirty two years time – about the same time that HIV has been around as a global health issue. On a population level, she argued, the infection would be irrelevant due to advances in healthcare, drug regimens and prevention measures.
Dr Huda Taha was passionate that there was too great a gulf between the wealthy west and the developing world. Yes, HIV may be irrelevant to people in New York and London by 2020 but there was a mountain to climb before poorer areas in the world could look to such a positive future. In particular, she cited devastating statistics about the incidence of HIV infection in many countries in sub-Saharan Africa, including Zimbabwe, South Africa and Swaziland.
Dr Michael Brady, the medical director of the Terrence Higgins Trust was arguing on the side of the motion and cited significant drops in new HIV infection rates in central London sexual health clinics as well as the recent campaign, #CantPassItOn, based on medical evidence which has shown that people on effective HIV treatment can’t pass it on to partners.
However, it was probably Yusef Azad, director of strategy at the National AIDS Trust, who sealed the debate for the no side. He pointed out that stigma against people with HIV was still a huge issue, and not only in communities where religious or cultural bias meant that homosexuality was frowned upon or HIV was considered taboo. In the UK, his organisation had had to take legal action to ensure that NHS England commissioned a crucial prophylactic drug for people at risk of HIV, PrEP. There had been a bill recently going through Parliament that assumed incorrect and stigmatising falsehoods around HIV transmission, such as that you can be infected with HIV from spitting. Stigma is pervasive. Until stigma is ended, HIV will remain with us.
By the end of the Q&A session, the minds of the audience were firmly made up. At a show of hands, the vast majority voted against the motion, concluding that HIV would indeed still be relevant and part of our lives in 2050.
The evening rounded off with drinks and canapes provided by Party Ingredients in the Court Room.
2018 Hippocratic Post debate, in association with the Worshipful Society of Apothecaries, the Terrence Higgins Trust, the Royal Society of Medicine and the National AIDS Trust took place at Apothecaries Hall in London on 8th May 2018. Our grateful thanks for Gilead Sciences which sponsored the event as well as the Worshipful Society of Apothecaries who provided use of their lovely Court Room and Hall.