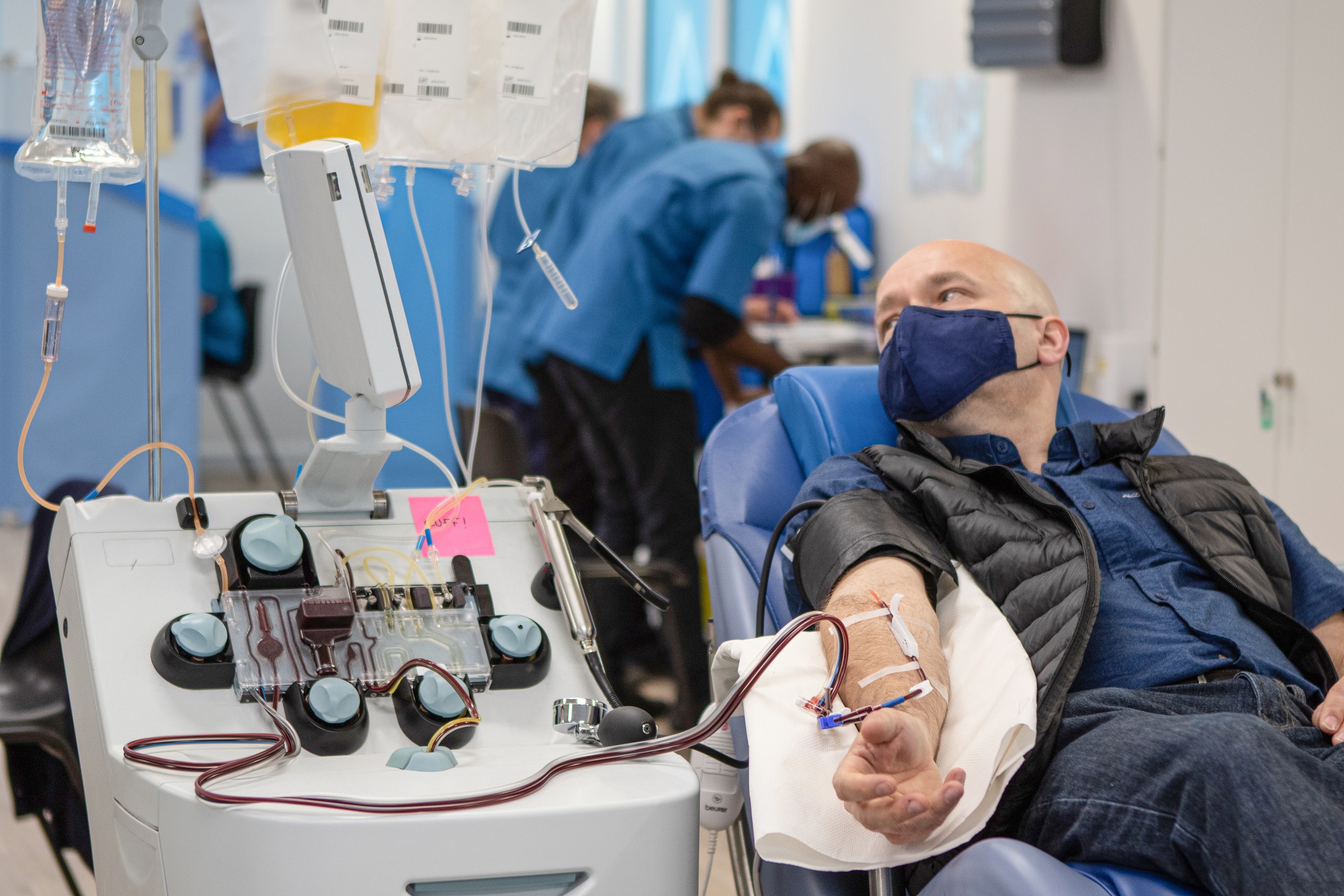 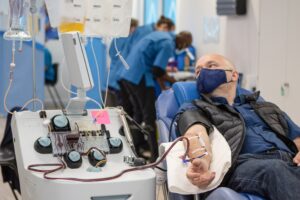 Plasma donation for the manufacture of a medicine – known as Intravenous Immunoglobulin (IVIG)- restarted in April 2021. This is first time plasma had been donated in the UK in more than 20 years. There is an international shortage of plasma medicine and pressure on supplies. Donations to NHSBT will bolster the supply chain and improve the self-sufficiency of the UK in producing its own treatments.

NHS Blood and Transplant – the blood service for England – is now taking plasma donations for these medicines at 11 donor centres. Additionally, plasma will be recovered from whole blood donations. The antibodies from the plasma will be separated out and concentrated into Intravenous Immunoglobulin (IVIG). This is a medicine used to save or improve the lives of people with weak or malfunctioning immune systems.

Few people know about plasma donation in the UK, yet thousands of people rely on IVIG to save or improve their lives. NHS Blood and Transplant needs more than 1,000 donations every week. The donated and recovered plasma is being stored ahead of the appointment of a company (or companies) to turn the plasma into the medicines, a process known as fractionation. The Government has funded collection until at least March 2022.

Where are the plasma donor centres?

The plasma donor centres are in Barnsley, Birmingham, Bolton, Bristol, Chelmsford, Croydon, Manchester, Reading, Stockton, Stratford, and Twickenham. Plasma and blood are collected in different venues, though on occasions – such as when stocks of a blood type are low – collection of both is done in the same venue.

Why wasn’t plasma collected for more than 20 years?

The ban on using plasma from UK donors was introduced in 1998 in response to concerns over the spread of a human variant of BSE, known as ‘mad cow’s disease’, called Creutzfeldt Jakob Disease. Experts in medicine safety at the independent Commission on Human Medicines (CHM) have now advised the use of UK-sourced plasma to manufacture these treatments is safe and can recommence supported by a set of robust safety measures.

Why did it restart?

Up until now, the UK has depended on imports of blood plasma from other countries – mainly the US – to manufacture these treatments. Due to a large rise in global demand for immunoglobulins, both plasma and these treatments have experienced ongoing pressures on supply in the UK and around the world in recent years. The impact of the COVID-19 pandemic has also meant a significant drop in plasma donations from the US, further increasing pressures on supply.

Donation will bolster the supply chain and improve the self-sufficiency of the UK in producing its own treatments. The government will also introduce a new condition to ensure UK plasma is used first for UK patients and not exported to meet contracts elsewhere.

Who do you need to donate plasma?

We need to hear from anyone interested in donation but there is a particular need for men to donate. As with blood donors, plasma donors should be are fit and healthy, weigh between 7 stone 12 lbs and 25 stone, or 50kg and 158kg, and be aged between 17 and 66 (or 70 if you have given blood before). Additionally, plasma donors need to be at least a certain weight depending on their height, and also need to have veins suitable for the needle. Men are more likely to meet these criteria, so male donors are especially needed.

How does plasma donation work?

The donor’s blood goes into a machine, which separates out the plasma by centrifugal force (spinning the blood). The donors red blood cells are returned, through the same needle. The machine alternates between drawing out whole blood and returning the red cells. Each donation is 540mls and the donation takes about 45 minutes to an hour. Comedian Jason Manford donated and shared this video of the process.

In summary: when people donate, the plasma is filtered out of circulating blood by an apheresis machine and the red blood cells are returned to the donor.

Do blood type matter for plasma donation? Does race matter?

Unlike with blood donation, blood groups and ethnicity do not matter for plasma donation.

What happens to a plasma donation after donation?

Plasma is taken to one of NHSBT’s three manufacturing centres, in Bristol, Manchester and Colindale. Plasma goes through the regular tests and is frozen and then stored ready to be supplied to a company (or companies) who be appointed to make the plasma into Intravenous Immunoglobulin, through a process known as fractionation.

How does Intravenous Immunoglobulin help people?

Who is IVIG used to treat?

Thousands of patients rely on immunoglobulin medicines for short-term or lifelong diseases and genetic disorders.  Typically, around 17,000 people a year receive IVIG.

The main areas of use are: 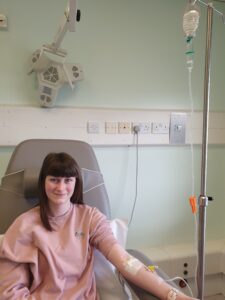 Natalie Beeton, who has a low antibody count and is suspected of having common variable immune deficiency CVID , receiving a transfusion of intravenous immunoglobulin (IVIG), a medicine made from plasma donations

Around 7,800 people a year in England receive plasma medicines because they have an immune deficiency (e.g. PIDs and cancer).

Primary Immunodeficiency Disorders (PIDs). These are inherited conditions which cannot be cured, but with access to treatment, most people can survive and enjoy a good quality of life. There are hundreds of PIDs – from the relatively common to the very rare. There are a large group known as Common Variable Immune Deficiency (CVID). This is a group of conditions in which patients are unable to make their own antibodies and become susceptible to infections. Patients may have severe, persistent or repeated infections, particularly affecting the ears, sinuses, chest, lungs or gut. IVIG is frequently used to boost antibody levels to prevent infections and to have a much better quality of life.

Secondary Immunodeficiency Disorders (SIDs). These immune disorders often occur when patients are being given essential treatment for other serious illnesses, for example chemotherapy or anti-rejection medicines after an organ transplant.  These treatments can undermine the whole immune system and IVIG can help add useful antibodies to the patient’s bloodstream to help fight off infections.Around 7,800 people a year in England receive plasma medicines because they have an immune deficiency (e.g. PIDs and cancer).

Around 4,500 people a year in England receive plasma medicines because they have a neurological disorder (e.g. Guillain–Barre syndrome and myasthenia gravis).

Guillain-Barré Syndrome. This is a very rare but serious condition that affects the nerves. It mainly affects the feet, hands and limbs, causing problems such as numbness, weakness and pain. In Barré syndrome, the immune system mistakenly attacks and damages the nerves. It can occasionally be life-threatening, and some people are left with long-term problems.  IVIG can speed recovery.

Myasthenia Gravis. A condition in which the immune system attacks the connections between the muscles and the nerve system. Patients can experience muscle weakness, drooping muscles, loss of speech and the ability to swallow food. Untreated, patients can lose the ability to walk and need to use a wheelchair.  The condition is one of the top three neurological conditions requiring IVIG treatment.

Around 2,400 people a year in England receive plasma medicines for haematological disorders. (e.g. Immune thrombocytopenic purpura and Haemolytic disease of the foetus and newborn).

Immune Thrombocytopenic Purpura (ITP). People with ITP don’t have enough platelets in their blood to help it clot and stop bleeding. They can bleed spontaneously in their eyes, gums, or bladder or bleed too much when they’re injured. They often have to avoid activities such as sports to minimise their risk of injury when their platelets are low.

Neonatal Alloimmune Thrombocytopenia (NAIT). This disease increases the risk of bleeding in babies. They have low levels of platelets because the mother’s immune system mistakes the foetus’ or newborn’s platelets as a foreign invader and attacks them. The most serious complication is intracranial haemorrhage (bleeding in the brain), which can damage the central nervous system or in some cases lead to death. IVIG is very useful in affected babies who need a rapid increase in their platelets.

Dermatology and other disorders. Around 1,000 people in England receive plasma medicines for other reasons (e.g. Kawasaki disease, transplant care, and bacterial disease).

Kawasaki Disease is a serious condition which mainly affects children under the age of 5. It causes the blood vessels to become inflamed and swollen, which can lead to complications in the vessels that supply blood to the heart (coronary arteries).  Around 25% of children with Kawasaki disease experience complications with their heart. If the condition goes untreated, complications can be fatal in about 2 to 3% of cases. The condition has become the leading cause of acquired heart disease in the UK.

Toxic Epidermal Necrolysis is rare but severe skin reaction which damages the skin and mucous membranes. It is a life-threatening disease which can lead to a dangerous loss of fluids and allow infections to develop. Serious complications can include pneumonia, sepsis, shock and multiple organ failure.

Around 100 people in England receive plasma medicines for infectious diseases (such as measles and tetanus).

Around 700 people a year in England receive plasma medicines for illnesses where there is emerging evidence of benefit but it is not yet a standard treatment.

People can get more information at www.blood.co.uk/plasma and they can register as donors by calling 0300 123 23 23.

Where can I read more?