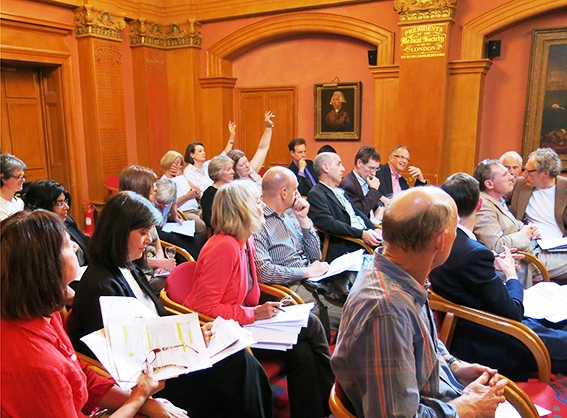 Report on the Special General Meeting

The Special General Meeting (SGM) of the MJA on June 26 voted to amend and modernise the MJA constitution, doing away with outdated rules which require the use of postal notification, and focusing on the core aims of the Association.

However, despite gaining a majority of votes, suggested changes to the eligibility criteria for Associate members were not successful because, under the MJA constitution’s rule, it takes a two-thirds vote of Full members present at a general meeting to pass a change to the constitution.

Thirty-four Full members attended the meeting at the Medical Society of London to vote on the several changes to the constitution that the Executive Committee had circulated to the membership in February 2013. At the start of the meeting, former committee-member Robert Short distributed a survey he had initiated shortly before the SGM which, he said, represented the views of 28 people he had contacted. Chair Victoria Lambert pointed out that the time to debate any modification to the proposed changes had long-since passed, nor did the Association allow proxy votes. The sole function of the SGM was to vote for or against the proposed new wording as on the order paper, and this had already been widely circulated for comment and discussion.

Most changes to the constitution were passed unanimously but a few attracted debate, the most vigorous being on a change to Associate member eligibility. The Executive Committee had suggested that this class of membership become open to public relations professionals. The arguments in favour claimed that this would enable us to attract more members, and would recognise the fact that, increasingly, journalists need sources of income other than the traditional media outlets. Arguments against the addition of public relations professionals to Associate membership were that their primary aim was to influence journalists, and that their inclusion could dilute the professional character of the Association. Some thought that the Executive Committee’s right to deny membership to new applicants, and the fact that Associate members do not have voting rights, provided sufficient protection from any potential corruption, but the house remained divided.

The meeting voted 16 in favour, 11 against this change, with two abstentions. This means a change will not be implemented and Associate membership will continue to ‘…be open to health professionals who do some journalism or broadcasting. At the discretion of the Executive Committee it may also be open to some people who work for health charities or other non-commercial organisations. Associate members shall have no voting rights, but may vote for a representative on the Executive Committee’.

A change to the aims of the Association also attracted debate, but this was eventually passed by 24 for, three against, four abstentions. There were objections from the floor that the new wording was not inspiring enough.

All other changes were carried, including allowing the committee to recruit suitably qualified non-members to hold the post of Treasurer or Honorary Secretary, upping the limiting of payment sign-off from £2,000 to £5,000, and changing how the constitution could be altered in the future; doing away with the need to notify proposed changes by post eight weeks in advance and making the period of notification four weeks by email, as it is already for motions for an AGM.

The discussion of the changes relating to the MJA Treasurer’s role led to a suggestion that the Executive Committee should, in the near future, revisit the constitutional provisions for the management of MJA accounts because they were currently insufficiently robust, and consider the introduction of two-person approval for high-value payments. Now that changes to the constitution may be effected in the same manner as AGM motions this will no longer be such a major exercise as this SGM has proved.

The revised constitution will be available on the website shortly.

Drafted with the consensus of the MJA Executive Committee, June 28, 2013

(Photo of the SGM by Richenda Power)