Snoring and sleep apnoea: is it all in your genes? 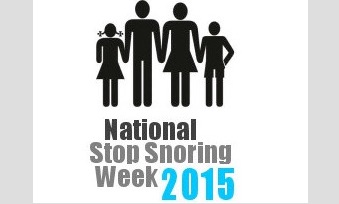 National Stop Snoring week runs from April 20-25 2015. This year we will be discussing: could it be down to your genes?

Although obesity tends to run in families it is debatable whether it is an inherited trait or influenced predominantly by behaviour and social factors. Obesity is a major risk factor for snoring and sleep apnoea. Type II diabetes and high cholesterol are also common associations.

Head and face shape, and upper airway anatomy are by far the most prevalent inheritable factors in snoring and sleep apnoea.  Anatomical features such as receding chin (retrognathia), small jaw (micrognathia), craniofacial abnormalities, and a large tongue, all contribute to a reduction in the size of the upper airway leading to a greater risk of snoring and sleep apnoea.

Research has found that if you come from generations of snorers your risk of being a snorer yourself is 3-fold higher. Evidence for the role played by inherited anatomical abnormalities upon this risk comes from research among families of known snorers. First degree relatives (parent/son/grandparent or siblings) are more likely to have similar anatomical abnormalities and report symptoms, such as daytime tiredness and sleepiness.

Lifestyle factors such as smoking and drinking are not inherited but again may be influenced by family, environment or friends. Smoking (including passive smoking) causes the lining of the nose and throat to swell, which will restrict breathing at night.  Alcohol consumption is a risk factor for snoring and can promote apnoeas by reducing respiratory drive and airway muscle tone.

Inherited abnormalities of the chemoreceptors that control breathing during sleep may affect ventilation causing the airway to narrow or even collapse. This will lead to snoring and sleep apnoea.  Similarly, the chemical response to normal oxygen saturation, like breathing control, is all part of your genetic make-up. This matters because during an apnoea you stop breathing (from a few seconds up to a minute or more). You are in effect cutting off the oxygen going to the brain. And if this occurs many times a night you will be left with a muzzy-type headache and feeling sluggish in the morning.

Interestingly, advances in our knowledge of narcolepsy, which is a highly inheritable condition, have helped us to better understand the mechanism of inherited sleep/wake regulation. People with narcolepsy and some with sleep apnoea have a deficiency of the hormone orexin. This controls the respiratory and sleep wake systems but it also plays a major role in the regulation of appetite, which may explain why obesity occurs in some families.

For further information contact Marianne Davey on 01737 245638 or email

The British Snoring & Sleep Apnoea Association is a not-for-profit charitable organisation dedicated to helping people get a good night’s sleep.

PLEASE CONTACT MARIANNE IF YOU HAVE QUERIES ABOUT THIS EVENT.