When fear is not failure: Conflict medicine meeting 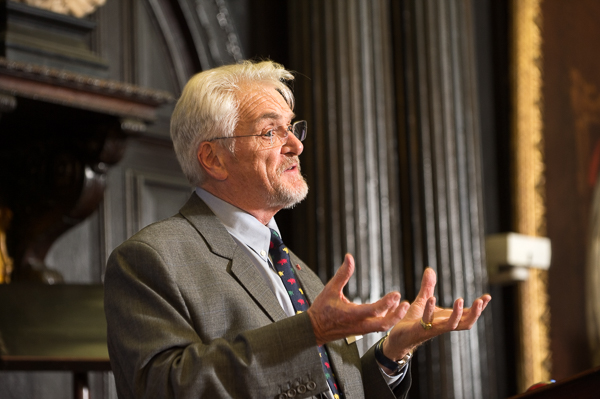 “Running away and being frightened by a catastrophe isn’t panic — it’s survival,”  says Professor Richard Williams, an international authority on the psycho-social aspects of disaster. 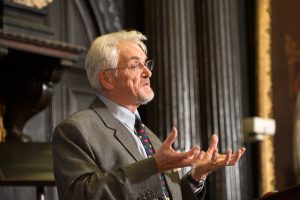 He was one of three speakers at the  MJA Conflict and Catastrophe Medicine meeting at the Apothecaries Hall in London who shared their experiences of tackling some of the most challenging medical emergencies at the front-line of health care .

Most of those listening were in awe of specialist paramedic Gillian Dacey’s modest description of how she crawls into unstable buildings to rescue people trapped in the rubble of structures destroyed by earthquakes.

The question everyone asked her was how she coped with claustrophobia: “You simply cannot be claustrophobic and do this job” was the straight answer. Instead her main problem when spending days trying to dig people out of a building’s air pockets is rubble bogies! 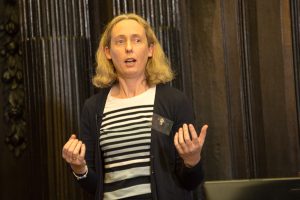 Gillian Dacey: You can’t be claustrophobic and do this job

The opening speaker for the night was Air Vice Marshal Aroop Mozumder, President of the Faculty of Conflict and Catastrophe Medicine based at the Society of Apothecaries, which has been offering a Diploma in the Medical care of Catastrophes to doctors since 1994.

He was inspired to work in this field of medicine after travelling to Ethiopia following Michael Buerk’s  powerful reporting on the famine in 1984.  “It was intense, fulfilling and changed me forever,” said Commander Mozumder, who explained that it was important that  doctors working in such disaster areas knew what to do. “We go into places like Haiti or Thailand after the Tsunamani etc but the current medical degree doesn’t train people for this — that’s why we introduced this diploma.”. 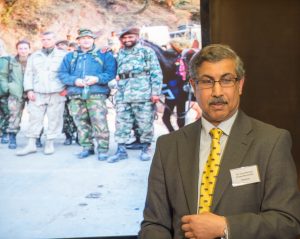 He explained that an earthquake causes more injuries than deaths so the need for immediate acute surgery has to be factored into medical plans, as does the risk that the following weeks are likely to bring deaths from infectious diseases due to the lack of proper sanitation.

He made the point that the Aid industry is currently unregulated, often uncoordinated and at times has a colonial approach.  “We teach doctors about co-ordinating the agencies, ensuring human rights are correctly exercised,” he said.

Gillian Dacey, a specialist paramedic, formerly with Public Health England, has travelled all over the world as a volunteer in search and rescue.

She talked of the amazingly sophisticated equipment that is used to determine whether people are still alive in earthquake rubble — ranging from snake-eye cameras to sound vibration detectors that pick up slight noises from tens of meters away.  For many of us who have seen disaster movies, it was easy to picture — but Gillian isn’t working on a Hollywood set.  She is constantly aware of the dangers of aftershocks and secondary collapses, so speed is important.  “We want to just get in and get out.  We have to adapt and improvise what we have learned in the NHS.  We’d love to do all the stuff we have been taught, but we can’t.  We can only do what we can.”

Which in her case has meant still rescuing and treating people four days after the collapse of the Margalla Towers in Islamabad, Pakistan in 2005.  As a woman, she not only has to deal with the obvious danger, but also the cultural differences in places like Iran and Pakistan when she has been shouted and spat at for wearing the wrong clothes. 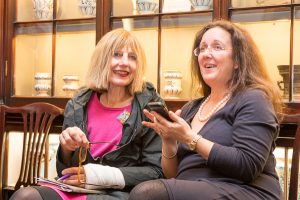 Professor Williams’ talk was about the myths and realities of the psychosocial aspects of catastrophes. Perhaps forgetting his audience’s profession, Prof Williams accused medical journalists for perpetuating the myth that such actions are symptoms of panic, but his talk was more educational than provocative.

He explained that lessons of the psychosocial care needed after a tragedy had been learned from history — giving examples ranging from the 17th century to World War 2 which had shown the need for early intervention.  Such care has to focus on a whole community, not just a single person, and he added that healthcare responders and rescuers needed to be considered as well as survivors.  I presume journalists covering such events should also be included in this group.

Prof Williams talked about the obvious indicators of distress in the aftermath of a catastrophe, ranging from guilt, to hypervigilance, to insomnia, but he also discussed the secondary stresses that are often forgotten.  These can come from unexpected sources, such as the behaviour of builders and insurance companies after major floods, which means people can still be living in temporary accommodation two years later. 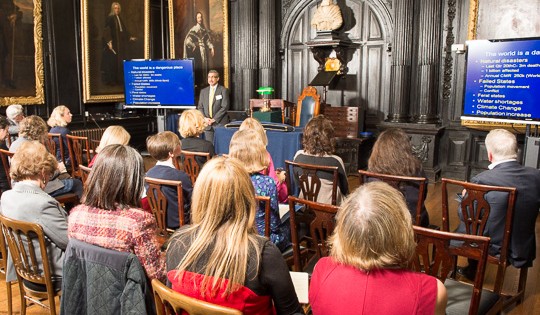 Members and guests at the Apothecaries’ Hall meeting: a history of healing

He said that on average 70 per cent of people can deal with the stress of such catastrophes but that it is important to monitor for risk factors that can turn otherwise resilient people into those in need of support.

There have been 38 major conflicts in the past decade, and three million deaths caused by natural disasters in the last quarter of the 20th century.  With terrorism, climate change, and potential water shortages, such figures will only increase.

As is usual with an MJA event, the talks were followed by a delicious supper, this time provided by executive committee member Thea Jourdan who had organised the event.   Thanks Thea.