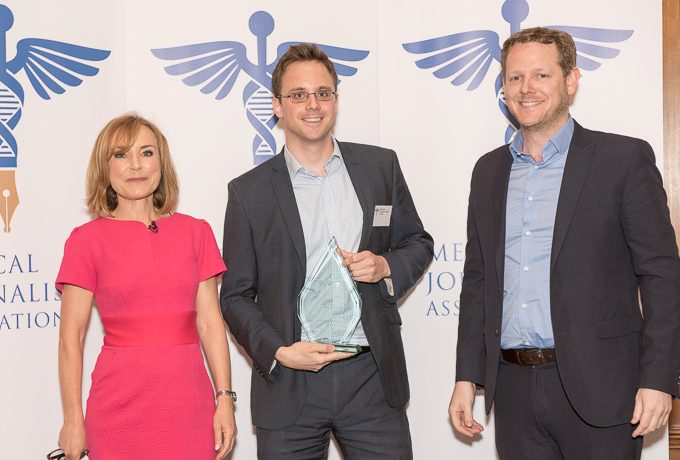 Times reporter Billy Kenber has won the 2017 MJA Award for Outstanding Contribution to Health or Medical Journalism, for his much acclaimed exposé of drug pricing.

The Outstanding Contribution Award, sponsored by the NHS Confederation, is the  ‘best of the best’, chosen by our entire judging panel from all the category winners.

Earlier in the evening Billy picked up the prize for News Story of the Year, General Audience for his story,  ‘Extortionate’ prices add £260m to NHS drugs bill.

Judges described his work as a “world-class investigation, with extensive biographies of the culprits, which led to a change in the law”.

Billy has been named Science and Health Journalist of the Year at the British Press Awards for the piece, and has also been shortlisted for the Orwell Prize.

MJA chair, Lawrence McGinty says: “The MJA Awards are a celebration of excellence, and Billy and all our other winners show that there is much to celebrate.”

Blogger of the Year was won by the pseudonymous Miranda Berry for what the judges described as their “clear and superbly well written” blogs for BMA online:  Employers don’t give a teabag for our morale; Why we should stop saying sorry for NHS cuts; How the poor get managed off waiting lists.

Charity Writer or Broadcaster of the Year went to Sarah Brealey for Material Change, published in Heart Matters, a publication of the British Heart Foundation.

Regional Reporter of the Year was won by Jonathan Gibson, for his investigation into the trade in repeat prescriptions for BBC Inside Out, West Midlands. Judges were impressed with the “courageous” piece of journalism tackling an important health story, describing it as “compulsive viewing”.

Jane Feinmann won Freelance of the Year for a portfolio of work published by  Mosaic, the Daily Mail and the BMJ. The judges said Jane’s “engaging journalism” illustrated the ability and skills needed to adapt to very different audiences.  Faye Kirkland, was highly commended for her contributions to BBC news, BBC Radio 4 You and Yours, and Radio 5 Live investigates. Judges said her work “clearly had a big impact”.

The winner of our award for Mental Health Story of the Year shows how much our industry has changed. Katie Silver was working as a UK-based freelancer, works primarily for the BBC. Her winning podcast,  The heritability of mental illness was pitched and produced in the UK, but originally broadcast by the Australian Broadcasting Corporation. Judges said this was an excellent exploration of the complex picture of the causes of mental illness and how we address treatment and prevention. “Well constructed and powerful.”

Mail Online journalist Stephen Matthews won Newcomer of the Year, sponsored by Healthcare At Home. Judges described The IVF clampdown  as “an impressive exclusive developed from a tip-off”. They added: “A strong piece following a story  through with research and interviews to produce and excellent article.”

Feature of the Year, Broadcast, sponsored by MSD, was won by Barbie Maclaurin, from Raw TV for The drug trial emergency at the hospital, a BBC 2 Drama Documentary. Judges said this was a “gripping story” which “raised important ethical and professional issues”.

Emma Young, won Feature of the Year, Specialist Audience, for Iceland knows how to stop teen substance abuse, but the rest of the world isn’t listening, which was published by Mosaic and described as a “compelling read” by our judges. Meera Senthilingam was highly commended for Sex in the UK: how culture and society can define your sexual health published by London School of Hygiene and Tropical Medicine. The award is sponsored by Astellas.

Feature of the Year, General Audience went to Patrick Strudwick for This is what it’s like to be dying of AIDS and then survive, which was published by Buzzfeed. The judges verdict was: “Original and brought the history of this disease alive to make it relevant to today.” Julie Powell and her colleagues from Good Housekeeping were highly commended for the GH guide to breast cancer by the women who know. The award is sponsored by Novo Nordisk.

Broadcast News Story of the Year went to Rachael Buchanan, for a report on the controversial work to grow human organs within pigs for the BBC Ten O Clock news. This news piece also served as a taster for a Panorama the following evening, Medicine’s Big Breakthrough: Editing Your Genes. Which was co-produced by Howard Bradburn, who directed the filming. Interviewing and scripting was by Fergus Walsh. The award is sponsored by our principal Awards’ sponsors, Boehringer Ingelheim.

News Story of the Year, Specialist Audience was won by Shaun Lintern, for Exclusive: Huge leak reveals BMA plan to draw-out junior doctors dispute published in the HSJ. Judges said this was “compelling” and “impactful”.  It was a big story which took an unexpected turn after his in-depth investigation.  Stephanie Jones-Berry, was highly commended for Exclusive: I had to use food banks as I have had literally no money which was published in the Nursing Standard and extensively followed up by other media outlets. This award is sponsored by Shire.

News Story of the Year, General Audience was incredibly hotly contested. But there could be only one winner, Billy Kenber of the Times, who also won our Outstanding Contribution Award for ‘Extortionate’ prices add £260m to NHS drugs bill. Andrew Gregory from The Mirror was highly commended for HIV organs used in NHS transplant for first time ever in medical breakthrough. The award is sponsored by Boehringer Ingelheim

Caroline Scott, won Case Study of the Year for a poignant story on organ donation which was published in the Good Health section of the Daily Mail: Tom, who was so full of life, was killed in a tragic hockey accident at the age of 22: Now his organs have helped up to 50 people in need of transplants. Judges praised Caroline’s sensitivity and the “respectful, moving and detailed way” in which she told Tom’s story. Aasma Day, was highly commended for Make an end a beginning, published by the Lancashire Post. This award is sponsored by Lilly

The award for Science Explained went to Linda Geddes for The complex circumstances that defined your gender,  published on BBC Future. Kat Arney and Jacqui Thornton were both highly commended. Kat for The viruses that made us human for BBC Focus Magazine and Jacqui for  When the miracle of childbirth turns to life and death published by London School of Hygiene and Tropical Medicine. The award is sponsored by Roche.

Judges said it was a very tough call between three very different entries, but the award for Editor of the Year went to Nigel Praities, Editor of Pulse. They praised his strong campaigns and ability to champion his audience effectively. “Very tenacious.” Lilian Anekwe, Deputy Editor of Chemist and Druggist (C+D) and Justine Hancock, Editor Daily Mail Good Health were both highly commended.  Judges said Lilian took on a big challenge taking the brand from print to digital. “Very impressive.” They thought Justine’s pages were “consistently compelling, well presented and well researched. She has produced some agenda-setting campaigns.” This award is sponsored by Sanofi.

We would like to thank our sponsors and supporters, without them these awards would not be possible. However, we should also add that, in keeping with the MJA’s motto — Independent and bloody minded — sponsors are not involved in any way in the selection of judges or the judging process. 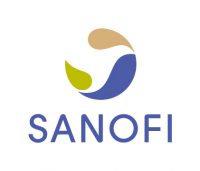