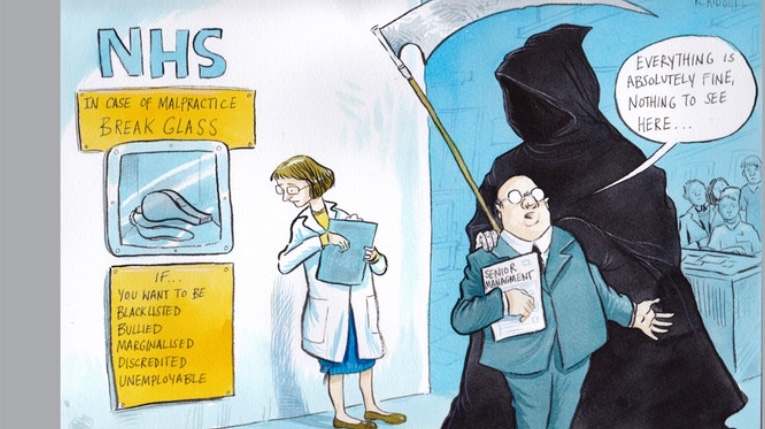 Without whistleblowers, some of the most important health and medical stories in recent history may never have been told.

The Bristol heart surgery scandal, sub-standard care at Mid Staffs hospital and the deaths associated with dangerously high doses of painkillers administer at Gosport War Memorial Hospital first came to light because NHS whistleblowers had the courage to speak out — and speak to journalists.

In 2012, radiographer Sue Allison raised concerns about patient safety and cancers being missed at the Morecombe Bay NHS Foundation Trust. As Private Eye has reported (click on the image below to enlarge it), what followed was a tale of alleged bullying, non-disclosure agreements and the end of a career.

Sue believes she has been blacklisted and has taken her case to an Employment Tribunal. A hearing to test the validity of the NDA she signed is scheduled for April, but the Trust maintain her claims are vexatious and are threatened to go after Sue for costs.

Sue is trying to raise £10,000 through crowd-fund to cover her legal challenge. This link takes you to her page where you can read more, or make a donation. 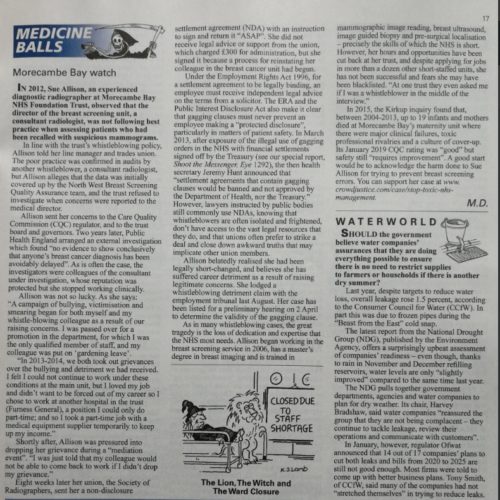 Jane is a freelance journalist, author and media consultant whose credits range from The Sun to the World Health Organisation.She edited the health pages of The Sun for five years, and is a former health editor of Woman's Own and chief sub-editor of the Telegraph Magazine.At one time or another she has written for national dailies and magazines including The Sun, Daily Mail, Times, Telegraph, Daily and Sunday Express, Daily Mirror, Woman's Own and Woman & Home. She is currently a regular contributor to the Express and Mirror. Jane provides a range of bespoke consultancy services including content creation, media strategy, writing reports and press materials, crisis communications, media advisory boards and media training.Her book, How to Have a Baby and Still Live in the Real World has been published in the UK, USA, Russia and Sweden. Pregnancy: the Best for You and Your Baby has been published in countries including the Netherlands, France, Spain and the Czech Republic.