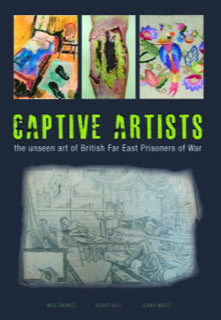 Buy the book from Amazon

The Imperial Japanese Forces entered the Second World War in December 1941, with a surprise attack on the American Fleet at Pearl Harbour. Within hours, they made simultaneous landings on the shores of British Malaya, Hong Kong, Thailand and the Phillipines Philippines in what was described as the start of their ‘lightening war’, which saw the eradication of almost 500 years of western colonial rule in the Far East.

Over a 5-month period, over 140,000 Allied Forces were taken into captivity by the Japanese. British servicemen made up around 50,000 of these numbers, joined by forces from Australia, New Zealand, Canada, India, Netherlands and America. The Japanese considered it shameful to surrender, and this attitude was evident in the way these prisoners were treated. What followed, was three and half year of captivity, in which the POWs were drafted into slave labour, constructing railways, airfields and supply routes to strengthen Japan’s new empire. Work regimes were brutal, and the punishments inflicted by the guards, for minor infringements were equally so. Tropical diseases were rife and this, combined with general neglect, mistreatment and lack of food led to the deaths of more than 30,000 POWs.

The Liverpool School of Tropical Medicine has a long history of involvement with FEPOW healthcare, starting with medical assessments when they returned from war in 1945 – continuing until the late 1990s. Many of the diseases they contracted while overseas, stayed with them decades later, and Professor Geoff Gill led research which encompassed both the physical and psychological aftermath of their experiences (the many medical publications produced can be accessed on the ‘Captive Memories” website: https://www.captivememories.org.uk/resources-page/fepow-medical-papers-published-from-lstm-1977–2009)

In more recent years, the FEPOW project moved its focus to recording the unique medical history of those that survived. Meg Parkes, conducted an oral history study from 2007-2009, tracking down and documenting the memories of FEPOW veterans. During her research, the men she interviewed often shared artwork from the camps – birthday cards, carvings and hand-made chess sets. She became aware of a growing number of previously unseen works of documentary art, created during captivity and hidden away, at great personal risk to the artists, creating a vivid visual record of what life was like at the time.

This book provides a record of this artwork, narrated by authors who each bring their complementary experiences to the work. Parkes’ own father was a FEPOW and she describes her interest in his experiences beginning as a teenager, when she asked to read his diary. He had sketches depicting day to day life – the layout of his hut in Japan and the structure of the latrines. She talks us through her journey, uncovering works that had never been seen before, sometimes not even by family members, and the stories these images tell.

Gill leads us through the medical challenges faced by the prisoners – the tropical diseases and conditions caused by malnutrition, alongside the surgical procedures, often carried out without anaesthesia or adequate equipment – all of this documented in great detail by talented artists.

Jenny Wood uses her experience of the artworks of war, having worked at the Imperial War Museums in London for over 38 years, and examines the newly identified works and the discipline of art therapy and its role as a survival strategy.

This is a fascinating read, and along with the accompanying exhibition Secret Art of Survival at the Victoria Gallery and Museum (VG&M) at The University of Liverpool (temporarily prematurely closed due to covid), it gives a unique insight into the experiences these FEPOWs endured.

The VG&M website https://vgm.liverpool.ac.uk/exhibitions-and-events/special/fepow/ has images, video footage and information about the works featured in the exhibition. More artwork will be going online in the week leading up to VJ75 anniversary (15 August).