How Is A Man Supposed To Be A Man? Male Childlessness – a Life Course Disrupted: review by MJA member Mary-Claire Mason 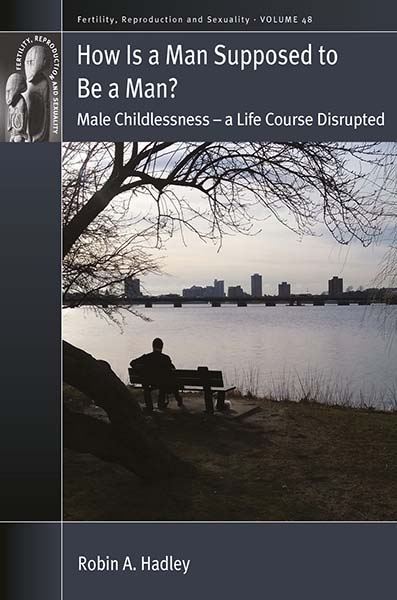 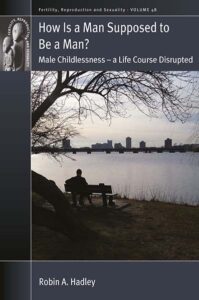 A highly personal book yet also an academic one with all the critical rigour that entails makes this a compelling book . It’s a must read for illuminating men’s experiences of involuntary childlessness for one reason or another e.g. infertility, not meeting the right person. So often they are invisible but Hadley shines the light on them, their stories and investigates the consequences for them as they age at a personal level and also in terms of health and social care provision.

The key to this remarkable book is in the Introduction. Hadley doesn’t flinch from revealing his inner life, his anxieties and anguish about wanting a child.

It starts ‘I want to have your baby you’ll be a great Dad. I have heard these words on relatively few occasions in my life but each time my heart has either lifted with joy or plummeted with fear. As I approach sixty-two years of age the words I hear now are ‘you would have made a great Dad’ . He is seventh youngest of eight children. Looking back he says his 30s especially were marked by feelings of broodiness, grief, loss, loneliness, anger, jealousy of those with kids, feeling excluded from the world of fathers . His sense of missing out is palpable. His belief that children are a bridge to a social life and there’s a stigma surrounding childless men.

He tells us more about himself – he is a white heterosexual male, divorced and remarried who worked for 31 years as a scientific and technical photographer, then qualified as a counsellor and is now too an academic.

Brought up to believe he would have children he tells us of going through ups and downs, self-doubt in his 20s, would he have what it takes to be a good Dad, a first marriage that failed and did not result in children, then thinking I can do this become a Dad and then finding this didn’t happen in another relationship. In his late 30s he met a ‘wonderful woman’ but she no longer wanted children. Hadley decided to put this relationship first rather than to look for someone else to have a child with. They are happily married but he talks at various stages of feeling something is awry, not being able to fully enter the world of parents and the connections he believes that gives. His ability to understand and articulate what he’s gone through he says is due to coping with a 30% hearing loss discovered in his early 40s with all the difficult issues that raised together with his counsellor training.

The book grew out of his conviction that it’s important to shine the light on men who are involuntarily childless and remain so through life because they is such a lack of research into them. They are hidden from view.

For me the word broodiness hits home – so unusual for a man to use. This is the point – we associate broodiness with women, we know of their longings and yearnings to get pregnant and be mothers. But where do men’s experiences and feelings, yearning to have a child wanting to be a father, figure? And what are the consequences for these men as they age of being involuntarily childless?

The answer is we pretty much don’t know. Hadley’s book is close to my heart because I too wanted to know about men and their experiences and feelings. In 1993 I wrote a book ‘Male Infertility – Men Talking’. It came out of my experience of infertility, my partner was told he had few sperm and the ones he had were of poor quality. He was never properly examined, it seemed little could be done and after a time we decided not to have children. What concerned me greatly was that I knew what I felt but I didn’t know what he felt about the whole experience, so I set about speaking to 22 men who wanted to talk to me about their experiences of male infertility. Common strands emerged including a sense of exclusion from infertility investigations, feeling guilty whilst their partner was treated rather than them, thinking they needed to be strong , stoical and silent for their partner. But when asked these men did feel e.g. ‘Kevin’ had a recurrent dream of pushing his dead baby round in a pram.

Now we have Hadley’s book much wider in its remit looking at men who remain involuntarily childless as they go through life, what does it feel like are they excluded from the world of men and the friendships that often come with fatherhood, what happens to them what are their stories? Hadley firstly examines the literature generally to get some context on why people want to have children using a cultural, sociological, historical approach.

The meat of the book is its interviews with 14 men over 50. Involuntary childlessness, feelings around fatherhood, relationships and social networks, ageing without children are each discussed in 4 chapters. There are also ancillary chapters and a pen portrait of each man so you can read his whole story. And an Epilogue which includes ‘myths about men’ where Hadley challenges beliefs e.g.‘men don’t talk, ‘ men can have children whenever they want’ , ‘men aren’t bothered about being a Dad’. Hadley includes a lovely poem he wrote earlier in 2008 ‘Something Missing’ about his experience.

What emerges for me from the book is that men are in effect the second sex when it comes to matters of reproduction and fertility, are socialised to feel they need to be strong silent and brave so are often unable to get in touch with what they feel and receive little help and support. There are a raft of other issues/questions – fertility being linked to virility, how having a child is proof that a man is eligible to enter the world of fathers, how a man without children can be seen as weak and written off, how men wanting to have contact with children can be seen as a threat, labelled a paedophile, how do these men see their future, not being a grandparent, what happens to them as they grow older, where do they show up in official statistics because you need the figures in order to provide healthcare services for them – there’s not much it emerges these men remain invisible.

This is a rich thought provoking emotional yet highly academic book – and with its clear structure and excellent index a huge resource to be drawn on.

HOW IS A MAN SUPPOSED TO BE A MAN? Male Childlessness – a Life Course Disrupted by Robin A Hadley

Find out more about the author: http://www.robinhadley.co.uk/